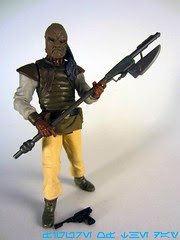 Commentary: Historically, this Weequay has been a high point of what Kenner (now Hasbro) can do.  The 1983 one had a top-notch sculpt for its day, with lots of details and wrinkles in an era where things were usually pretty simple.  It also introduced an "action pose" where both hands could be posed on the weapon, which was carried forth to the 1997 version which managed to be the shining sculpt of its day.  Now in 2012, the costume gets another release which turned out to be pretty great.  The problem is, the 1997 one was really spectacular despite being in the era of beefy, six-jointed figures.  It stood out as one of the best then, which makes it harder for this even-better figure to look amazing today.  Hasbro replicated the outfit with all sorts of folds, wrinkles, and warts with a wonderful texture on his skin and costume.  The weapon, now larger, has some decent detail and has no problems being held by the surprisingly ornate hands.  The fingers look like they were sculpted individually, plus the index fingers are separated so they can easily squeeze a trigger on most guns.

The only place this figure falls short is, oddly enough, movement.  While he does have 14 points of articulation, the lateral shoulder movement is limited and the knees look wonky if bent.  It's great to have the option, but this is a figure where the design, specifically the pants, do not necessarily beget great articulation.  I'm glad it's present so we have the option, but given how these figures behave once opened it seems unnecessary.  Still, have you seen a better Weequay?  Answer: no.  It's a wonderful figure and one which should be on the top of your list.   As Jabba's thugs go, this is another fine entry in Hasbro's ongoing plan to make all of the toys you grew up with and loved feel inferior.  It's just so dang nice.

Collector's Notes: This one, for some reason, was cheap on Amazon after the "last wave" of Vintage came out in 2012.  I don't know why this one isn't as desirable because it really is superb. If it's still available for $7 and you don't buy it, you're part of the problem.  Even for $10-$13 it's pretty great.