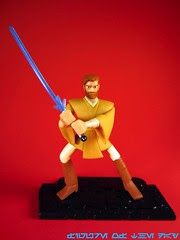 Commentary: Sooooo Obi-Wan Kenobi.  It's the previous one with a new head.  That's really all you need to know, but hey, we have space.   The figure has jointed shoulders and a jointed neck which allow you to pose him with both hands on his weapon, but little else.  It's effectively a nice statue at a low price.  The detail on the head is a decent translation of the 2D design into the third dimension, and given the reasonably low price of this set it's not like you're going to feel ripped off.  It's not a bad figure, but it doesn't deliver that much in the way of a different experience.  If you like what you see, you should get it.  If not... well, the rest of the set is pretty sweet, so get it anyway.

Collector's Notes: Cheap on eBay! Get it before people realize what they're missing!