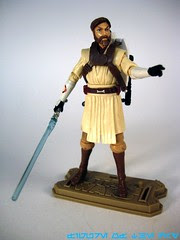 Bio:  Obi-Wan Kenobi uses climbing gear to infiltrate a Separatist stronghold. Even the strong, agile Jedi Master sometimes needs help to overcome heavily fortified structures. Using the gear, he ascends the sheer, towering wall that surrounds the Separatist facility, and quickly takes out the battle droids that he encounters inside.  (Taken from the figure's packaging.)

Commentary: The Obi-Wan Kenobi animated figures don't always look exactly like the TV show, but they're getting much better now.  This one is skinnier and more angular, which is a nice departure from the more rounded (but more articulated) debut in 2008.  Based on the latest redesigns of the character, he looks pretty slick.  Check out them pointed eyebrows, the assured demeanor, and the nice deco.  There's not much dirt here, and the articulation is sadly a little bit reduced from before.   Deco is getting better as the wrist communicator is getting some paint, but well, you get 10 joints.  So it's a toss-up.  I was happy with the previous "new" version, but this one makes for a better overall toy.   The one point of deco missing, or so I feel, is the lightsaber.  The hilt is all silver and lacks the black or gold we've seen on other recent releases, plus it's a little pale in the blue area.  As toys go it feels sturdier and looks better than other releases, but we're in the midst of a tug-of-war between people who feel these should be toys, and those who feel they should be collectibles.  I don't think Hasbro can decide right now, but the figure certainly looks good.  I'm sure packaged collectors will love it, and kids will love it, but the opened collectors... I'm not so sure.  I like how it looks a lot, but I haven't actually spent much time playing with it.  I could blame that on Glyos though, those have been hanging out by my couch for most of 2012.

Collector's Notes: Cheap! Nobody wants him!  Get him while the getting is good, kids.

The facial sculpt is very good as you mention Adam but the articulation is sorely lacking. In a week where I picked up the clone wars mace windu for my son for £1.95 and this figure for myself for £6 the vast difference in poseability is quite disappointing.... But the face sculpt is good... Yeah, But he can't twist his wrists... But, it looks like Kenobi... Yeah but he can't move his legs that far because of his skirt... Yeah but the face! You get my point. End of the day get it cheap for the head and swap it onto a better body.