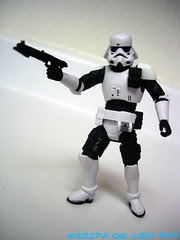 Bio:    The navy commando officer leads a squad that consists of several troopers, a sergeant and a medic.   (Taken from the figure's packaging.)

Commentary: The Imperial Navy Commando came in a set which, frankly, is kind of annoying.  It's a nice figure and a cool design, but it comes form the lesser ports of the Force Unleashed games, with last-gen exclusive characters that a lot of people flat-out will not recognize.  You get 14 points of articulation on this all-new sculpt, which was also shared with a Commander figure in the very same set.  Hasbro put a little extra deco into this figure on the back, under the backpack, where you can't see it.  Smart.   It's still cool, though, and is a fun hybrid of Stormtroopers, Scout Troopers, and various concept designs.  Do I detect a whiff of McQuarrie's early Snowtrooper?  I think I do.  It has a Clone gun for some reason, but hey, it's cool.  The chunky working holster is nice too.

The level of detail isn't bad, but there's not a lot of painted detail needed here.  It's a white figure with black deco, and Hasbro is pretty good at making these nowadays.  Get it if you can, it's neat and looks like it fits in with many of your other toys.  What more can you ask for?  Aside better pricing, I mean.

Collector's Notes: The set is expensive now, but was odd when it first hit too.  Just Darth Phobos would sell for $30 on eBay, and the whole set was $40.  Y'all so bad at math.  Now it's a lot more, so consider pricing out the set versus individual figures and be smart about it... it's probably more sensible to buy the set and sell off the spares.

What a goofy looking Imperial! Higher priced too? Pass