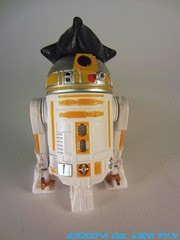 Commentary: If this Yellow R2-Series Astromech Droid looks familiar, it probably should.  While made out of Droid Factory parts, the deco is quite similar to the 2006 release R2-C4 although neither is obviously superior.  This version seen here has a big black eye and a bright red dot under it, plus a shining, clean, and new droid body.  R2-C4 had some gnarly grim deco, a light-up eye, and black wires on the feet.  The articulation is pretty similar, and while R2-C4 had a sharper looking body, this Droid Factory release has a better dome.   Since neither has the obvious edge, I should note the Droid Factory release has a hole in its dome and it can wear Jack Sparrow's hat.  That's gotta be worth something right?

Collector's Notes: Neat, but expensive and hard to get.   Hopefully someone at Disney realizes there could be a decent market in selling buckets of parts to people who can't make it to the park to spend an hour rummaging through bins.