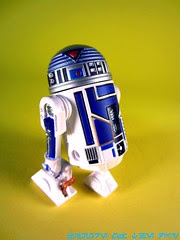 Image: Adam's photo hole.  Oh, and I'm assuming you'll build this figure exactly as I did this time.

Commentary: At first glance, you probably think that the R7-Series Astromech Droid is just 2008's R7-T1.  Nope!   Despite a number of superficial similarities, Disney's version of the R7 in blue is much, much bluer.  A brownish color covered many of the panels on Hasbro's 2008 release, while this new one is pretty much all blue.  Also, the legs are R2-D2-style legs, not the R7 legs with the rockets coming out of the side.  The greenish lights on the dome are now red, and the blue is closer to R2-D2's in color.  I really like this version a lot more than the one which was parted out in 2008, but since it's harder to get it's all up to you if it's worth sucking it up and paying the Disney tax to get it.  At first glance the droids are exactly the same, but a side-by-side comparison reveals the bluer and therefore brighter look of the 2012 release.

Collector's Notes:  This item was a customizable release at Disney Hollywood Studios in Orlando, and you can configure them any way you wish.  Any way other than this way is, of course, wrong.

Adam, I want to say thank you and I hate you at the same time. I hate you because you have taken oh so much valuable, precious time and wasted it on these wannabe, I'm never going to bother trying to get any of these droids. AND, Thank You for doing what you do each day please don't ever stop. I so look forward to my FOTD every day! Now just get back to the real stuff!