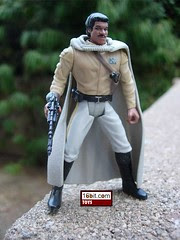 Bio: Proving his impressive flying capabilities and natural leadership qualities during the battle of Taanab, Lando is appointed General in charge of the attack on the second Death Star. (Taken from the figure's cardback.)

Commentary: There was actually a time in the history of Star Wars where a sixth joint-- the waist joint-- was still a sign of improvement over the vintage era. This Lando Calrissian was released near the end of that era, as other joints were slowly being introduced to the line. This figure shows the transition of its day, as it's a figure with lots of sculpted details like a gun in a chest holster, a nifty fabric pattern on a plastic cape, and a nice rank badge on a body with a giant beefy chest. For some reason Kenner decided to make all its first Lando action figures with superhuman proportions, and this lasted until about 2001.

The figure does not hold up well, but the 2004 resculpt isn't much better. This is one of the rare releases where on more than one level, the 1985 release is arguably the best overall-- there's still room for a less-awkwardly posed figure with better likenesses and cloth capes. This figure's wide stance is borderline nuts, certainly not conducive to piloting the Millennium Falcon. The cape is easily removed, but it does tend to get in the way. The gun is huge, as are his hands, and this figure tends to be just a little more exaggerated than most of his peers from its era. It was released alongside an Endor Rebel Trooper, an Endor Dress Leia, and a Bespin Luke, and those three were more acceptable to fans in terms of their proportions. Why Lando gets the short shrift, nobody knows-- perhaps he was sculpted earlier and sat on for a few years?

Collector's Notes: Available briefly in 1998, this figure was never repackaged. There were some package variations, but guess what hippies? Nobody cares. It's basically worthless, so you can get one super cheap.

"Guess what hippies" that brightened my day. Thank you Adam for making my mornings, screw NPRs morning addition I want to know about Star Wars.

I think this is the worst SW figure ever made.

Yeah, the leg stance had me thinking "where's his horse?"