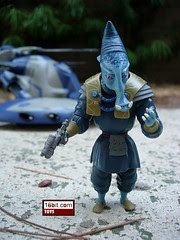 Bio: Separatist General Whorm Loathsom meets with Obi-Wan Kenobi to accept the Jedi General's surrender on Christophsis. Loathsom draws angry when the discussion drags on and, with his immense strength, throws a heavy table aside. He demands an end to the proceedings- which he gets, but it's not the conclusion he's expecting. (Taken from the figure's packaging.)

Commentary: Love him or hate him, Whorm Loathsom is a great example of what Hasbro is capable of with this cartoon line. He's big and colorful, bulky and articulated. Shaped incredibly differently than other releases, this guy has a goofy hat, tiny legs, and excellent arm articulation. While his legs are tiny, he still can fit in the top of the Federation Tanks, stand around and look neat, plus hold his smaller blaster just fine. (I didn't much care for the rocket firing one.) Its feel is very different than most other Hasbro Star Wars figures, so you might find it a little bizarre to futz with a figure that has giant elbow joints and little puny hands. The fact that he has two neck joints is a sign of good design, and let's face it, it's nice to get new aliens as toys in a line that's basically Jedi and over 50% repaints of a single figure. Good job on this one, Hasbro, please keep the other creatures coming!

Collector's Notes: A new one-timer (so far), there are no known plans to reissue this one since he just came out. I expect to see him again a few times, but I'd still get while the getting is good.

This figure is the epitome of what’s wrong with the Clone Wars line, it looks like it came from a Playmobile set not Star Wars. I get why kids would like him, just not collectors in their late 30s.

I bought one, and I'm 36. He looks awesome in the turret of my blue/white AAT.

I bought one, too, and I'm almost 41. I don't open my figs, but Whorm has such a cool deco that I wouldn't dream of passing him up. It's the blue that catches my eyes - my blue eyes. My only complaint is that I wish he wasn't packaged with his head off-center.