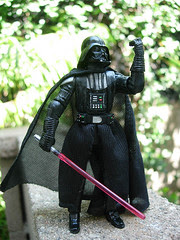 Image: Adam's back yard. There was a slight breeze.

Bio: Darth Vader has waited many years to confront his former master. But Obi-Wan has one last lesson for his former Padawan, the Force transcends time and space. As Vader witnesses Obi-Wan become one with the Force, his victory is bittersweet, for he is deprived of the satisfaction of seeing Kenobi's lifeless body at his feet! (Taken from the figure's package.)

Commentary: I actually thought I reviewed this Darth Vader figure already, and apparently, I did not. Well. The body is largely based on the 2005 Evolutions sculpt, but with a new head, torso, and heavily revised arms to have the unique gloves and robes only used in the original Star Wars. The figure is now able to easily sit, thanks to his cloth parts, and pilot pretty much any vehicle that it would make sense for him to fly around in. Given the Darth Vader TIE Fighter and Sith Starfighter, this is a nice thing for Hasbro to consider-- kids might buy and play with these toys. It just so happens that what's good for the kid goose is also great for the collecting gander, proving once more that metaphors should be flogged until dead.

The figure looks better than most Darth Vaders from Hasbro. The lightsaber is great, the helmet fits nicely, and underneath is a slightly aged version of the Hayden Christensen head you've started seeing in 2005. (Since he turns into Sebastian Shaw in under 5 years, one can assume much drinking and smoking was involved.) It's easy to get a good pose out of this one, and both hands were designed to grip a lightsaber-- unlike the Evolutions body. His final accessory (not shown) is Obi-Wan Kenobi's crumpled cloak, which also has a lightsaber sculpted on top. What makes the accessory particularly stunning is that Hasbro went through the trouble to detail it. The lightsaber is silver and black, and the brown cloak has additional dark brown on it to show definition and detail. There are even boot prints and a foot peg to admire, but unfortunately the peg is hard to get positioned under Vader's boot just right. Still, it's a neat extra to have handy for that giant Death Star playset that we will never, ever see come out of Hasbro. That's right, I said it.

Collector's Notes: This figure was originally released as part of a tin gift set (with Leia, a Sandtrooper, and C-3PO) in 2006, but since the same exact figure came out in 2007 with a coin and an added Obi-Wan robe accessory, I'm going with that as the definitive release. The figure was also repackaged in the Diamond/Previews Exclusive Crimson Empire Squall/Crucible set. Variant hounds, take note: this figure comes with either a gold or a silver coin on its basic carded release. Odds are if you're a hardcore collector, you'll end up with at least 3 of this figure from varying gift packs. Each one, so far, has something new of merit to offer you.

Most notable about this set is that cloak accessory-- for fans that say Hasbro is afraid of adult themes or dying, and decapitated figures or drug dealers aren't enough for you, here's the only corporeal remains of a great Jedi hero. Which Vader stomps on. Surely that's worth something.

The removable helmet kills the asthetics about the neck.