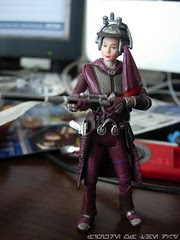 Commentary: I figured we were done seeing Zam Wesell figures-- we got 2 in 2002, the Sneak Preview one was a slower seller, and the Saga carded version was a mega-pegwarmer in some Phoenix (specifically Glendale) neighborhoods in Fall 2002 to the point of having multiple pegs of just the one character. As such, this release was quite surprising-- although in this age of collector-specific packaging and collector-targeted figures, the audience seems to be a little more receptive to the purple bounty hunter. While the final 2002 release had a really neat quick-draw function and a magnetic arm, well, it wasn't quite enough. What does this one have? Swappable heads, a customizable helmet, and that super-articulation you all love so much.

Without a doubt, this is the best-sculpted version of Zam yet. With two heads, you don't have to worry about fidgeting with an easily lost mask-- just pop off one head and stick on the other. It's worth noting her neck is human flesh colored, so when she's wearing the Clawdite head the skin doesn't quite match. They pop on and off easily and look pretty good relative to the films. I've already received a few comments from fans complaining that the human hair color under the helmet isn't perfect-- actress Leeanna Walsman was seen as having blonde tips in some photos-- but it's not like we saw her hair on-screen anyway. (In short, no, I don't anticipate a variation.)

The neatest feature of this toy is the helmet. This was included, I feel, just to drive us all nuts. How can we decide how to display it with so many options? The sight is articulated, the veil is removable and can either cover the face or hang to the side, and on top of that, there are two heads to choose from. With all those combinations, I'm sure picking how to display her will drive more than a few fans nuts, and it might even lead to the sales of additional figures just so you can have her on display more than one way. The gear all looks fantastic, and she has two guns too. The pistol fits right into the holster (just like the Saga 2002 version) while the rifle is nice and stiff, seemingly not being too droopy or too brittle. Score one for Hasbro improving on this one.

And how is the body of the figure? Also great. The sculpt is fairly true to the film, with silver armor, unique boots, silver gauntlets, and the waistcoat bringing you many shades of purple. She has no real problems standing or holding on to her weapons, making her a big improvement over previous releases. While you may not need a new Zam Wesell figure, this one is fun enough to play around with that I'd suggest getting it in addition to previous releases. Sure, it's going to be eight or nine bucks, but the extra gear makes the whole thing essentially worthwhile. Unlike most figures in this line, there's a lot more to this figure than just posing her-- and I really enjoy seeing that level of fun on my toys.

Collector's Notes: I've seen Zam in the wild a couple of times in the past week, which means you'll probably see her if you head out to the stores more often than once every week or two. Or you can order online at the link below and support this site. (All I'm saying is I wouldn't complain.)

Email ThisBlogThis!Share to TwitterShare to FacebookShare to Pinterest
Labels: Attack of the Clones, Bounty Hunters, TVC

AND this version actually fits in the green Zam Wessel speeder from 2002. The plastic skirt makes it not perfect, but she can lean back into the pilot seat, get her feet reasonably on the pedals and her hands on the steering yokes relatively easily. (Certainly not as hard as getting the Clones on the Swamp Speeder!) The end result is you can't really SEE Zam in the speeder, but the speeder now has a pilot in there and overall it looks pretty good!

Wow, I wish figures were $7 or $8 for vintage where I live. Not that it matters because my closest stores never get new product....

And I'd love to support the site, if I could buy individual figs from EE :(