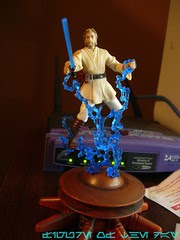 Bio: Jedi Knight. Master to Anakin Skywalker, Obi-Wan exemplifies the courage of the Jedi order. (Taken from the figure's packaging.)

Commentary: There's no shortage of Obi-Wan Kenobi figures from the prequels, and I was genuinely excited when I first got this one back in 2002. But we're here to talk about the 2004 rerelease, which has slightly lighter hair and a darker set of eyebrows. Other than that, it's fundamentally the same as the 2002 release and arguably not different enough to get you interested in it. But it comes with a neat big accessory so that's why you want this.

The new piece, which was originally supposedly developed to be included with the Geonosis Arena playset, was cut due to budget reasons and ended up in this set. (The Arena was pretty cheap, as low as $40 I believe when it first hit.) It makes sense that you'd want to cut the less exciting bits, and this makes sense to remove. The round bits on the base rotate, just like in the movie. The blue clear energy bits can more or less grasp a figure, it's a little awkward to get this figure into the stand but it basically works. You can even toss a lightsaber in his hand if you really want, even though it makes no sense in the context of the scene where Count Dooku interrogates the Jedi.

A good accessory can make a figure you don't want into something you'll throw down some serious money to get. I bought this set because of the Nikto Jedi variant and this very base, which so far remains exclusive to this gift set nearly seven years later. It's weird to think, but the accessories aged better than the figures. So if you like this idea, get this set, take the stand, and put the figures into a drawer somewhere.

Collector's Notes: Unsurprisingly, this set is now effectively worthless. The main selling points were this big accessory and a Nikto Jedi who has since been upgraded. As such, buy the set for this restraining device and you'll probably be pretty happy.