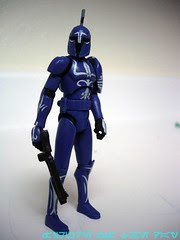 Bio: A Senate Commando captain and his elite commando team confront suspicious arrivals to the Senate building. The captain and troopers rush to the platform where Cad Bane has landed without permission. They are prepared for a fight if necessary, but are taken by surprise when Bane springs his trap. (Taken from the figure's cardback.)

Commentary: I like this one too. Sharing the same mold with the enlisted figure save the helmet, the Senate Commando Captain shares the same blue armor but adds a fair amount of white detailing, effectively building on Captain Argyus from a few years ago. That figure had new arms, but otherwise was based on the Clone Trooper mold. The unique aspect of this figure is a helmet with a much larger crest, which sits atop a nicely-jointed body with 16 points of articulation. The awesome bend-and-swivel wrists are here, so he'll look good aiming his gun or hanging out or doing whatever.

I like this mold-- I don't get why it was an exclusive. I wouldn't mind having a squad of these guys, and I don't think you'd mind either. If you bought any clone figure from 2008-2009, you basically know how this guy is built-- minus the giant armored shoulder and alternate helmet design. It looks good, it plays well, it's worth owning. Do I need to go on? Because I feel more or less done here.

Sadly, the add wrist movement can't make up for weak elbows. They can't make a right angle, and boy does that hurt some poses for an action character. Current GI JOE occassionally has the same problem. Take it or leave it, after Argyus I left these guys, cool heads regardless.