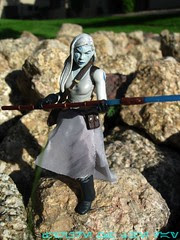 Bio: Jarael (born Edessa) was a female Arkanian Offshoot. She was hot-tempered with eyes and hands like Humans and pointed ears, bearing tattoos that were known as the Flames of the Crucible bearing the name "Jarael" in the ancient language of the Crucible meaning "protector." (Stolen from Wookieepedia.)

Commentary: I wasn't as excited to see Jarael as I was her pack-mate, because Rohlan Dyre has an awesome design with great gear and Jarael is some blue chick. There was a long list of characters from the Knights of the Old Republic comic I expected to see plastic, and I guarantee you she wasn't one of the first six I'd have bet on getting. With what's essentially a tank top and a cloth lower dress, the figure has a good range of movement and has no real problems holding her staff weapon.

While the deco on the head is exceptional-- the hair sculpting is great, the blue skin is awesome, the deco is dynamite and the tattoos are just amazing-- it's still a boring character. There's not much getting around that. This is a quality figure of a character I'm willing to bet most of you didn't ask for, and it really is a good one. I mean, considering this is the only one Hasbro will ever do, it's awesome. The little pouches, the painted buttons, it's obvious Hasbro put a lot of love (and paint) into this one. For fans of the character or comic, you owe it to yourself to get her and add her to your collection. For people that don't dig the extreme pre-history of the Skywalker clan... run away.

Collector's Notes: Released about a year ago, and still available if you want it. Her parts have never been reused and unless maybe they crib these parts to make Dani or another Zeltron some day, I doubt the tooling will ever see the light of day again.