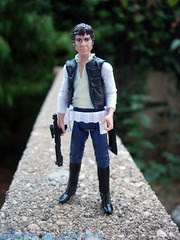 Bio: After rescuing Princess Leia, Han battles his way back to the Death Star’s hangar. The stormtrooper disguise came in handy, but now it’s his bold nature and his blaster that will free him from the Empire’s clutches. (Taken from the figure's packaging.)

Commentary: After 34 years I can honestly say that Han Solo might be the character I've been the least happy with in terms of the head sculpt. Hasbro does a good job getting a figure that looks like "Han Solo," but not "Harrison Ford." The 2004 head was pretty good, and this new head has slightly more exaggerated features-- depending on the angle, you can see that this head does look Ford-esque, but some parts are a smidgen larger or smaller than they should be. The elements are largely there, but as a whole it misses something, and it's possible part of the problem might be the paint or kind of plastic used. Either way, the end result isn't ideal-- although the articulation is.

WIth 14 points of articulation, it's close to perfect-- the belt may get in the way of hip movement, but it's still quite good. With a different head, and maybe a holster, this would be a good normal Han body. The sculpt is essentially the same as the 2004 release, with some tweaks to the legs, but there is one deco problem: the torso's white shirt seems yellower than the arms, which makes little sense given it's painted white and usually if something goes yellow, it would be plastic molded in white. This isn't age either-- this is how it came out of the package, and this photograph was taken in late 2009. (Apparently, I waste no time and plan ahead.)

As part of a collection-- specifically as a part to get all the pieces to build R3-A2 since Han has his torso-- this is an acceptable enough figure. It's not a variant I recall much clamoring for, and the added large Stormtrooper helmet and body armor don't add much to it from my perspective. As a toy, it's an incomplete disguise and while I would like to say "better than nothing," maybe an alternate gun or a MSE droid would have been more appealing from where I sit-- particularly since this wave wasn't exactly easy to get in some markets for the kids. Get it if you can, but don't pay a lot for it.

Collector's Notes: Complete and without the droid piece, it can be had for under five bucks. A complete R3-A2 build-a-droid, which is the robot which came with Han and the rest of this series, sells for about $16. A droid piece can go for $4 or more, so if you can get a carded Han cheap it might be worth your while. There are other versions of the character which look better, but few have this one's range of movement and diverse accessories. Heck, none of them have removable Stormtrooper body armor-- this one is unique in that department.

I always thought this was Hasbro re-do of the "big headed" Han Solo figure from the vintage 70s line. Just like how the new Luke with the same belt is the "yellow hair" equivalent of that vintage figure...