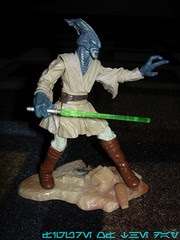 Bio: An amphibious creature from the watery world of Sembla, Coleman Trebor is a brave and noble Jedi Knight and member of the Jedi High Council. He is one of many Jedi assembled by Mace Windu to confront the Separatist armies on Geonosis. Here, where the Clone Wars begin, Trebor defeats countless Geonosian warriors and droid battalions, but meets his ultimate fate in the gunslinging hands of bounty hunter Jango Fett. (Taken from the figure's packaging.)

Image: Just say no to rugs.

Commentary: If Coleman Trebor represented a stage in Hasbro's development as a figure maker, this would be the phase where she went off backpacking to German to find herself and join a band named "Chyx." (If you know the joke, pat yourself on the back.) This figure was an entirely new sculpt. This one came out between the 2002 phase, where most characters were statues, and the super-articulated phase, which really kicked off at the end of 2003 and again at the end of 2004. Trebor has 12 points of articulation and it seems obvious to me that Hasbro was aiming to add articulation while maintaining that statue aesthetic. The figure has a ton of sculpted detail in his robes, and very specific folds in his outfit that lend it to being displayed in a very specific way. Having said that, the legs and robes were designed so he can sit-- he still looks like he's going to fight, but you can fit him inside some vehicles. Aside from vehicle compatibility and packaging, this figure feels like the kind of thing most collectors wanted-- tons of statuesque detail and virtually invisible joints.

His articulation, like many 2003 figures, is uneven. Both wrists are jointed, but only one elbow. One knee is articulated, with the opposite leg's ankle having a joint. It's quite unusual, but it more or less works-- this is a figure designed to stand up or be displayed without too much force, except for one tiny little flaw which I'm now going to pick at as that's the way of my people. His right hand? It's a closed fist. There's a hole in it for the lightsaber, but it's an incredibly tight fit. Over the years in Star Wars, we've learned that closed fists designed to hold weapons are usually a pain in the neck. (See: 1995 Boba Fett.) One you get the saber hilt in his hand, it doesn't want to come out. Sure, you can get it out, but it's going to involve use of the force. And by force, I mean my three ounces of strength. This is one rare case where I am extremely happy that the lightsaber blade is removable from the hilt for storage purposes: I do not like extracting the hilt from his hand.

The stand is also really cool, with cracked mud and dead droid bits on the bottom. A little paint can make it even better, but overall this is a very strong figure. It's not 16+ joints super-aticulated crazy time, but for five bucks this was a remarkable release and it fits right in with your 2011 figures. If you go through life with only one Colman Trebor action figure, make it this one.

Collector's Notes: A new Coleman Trebor came out in 2009, based on a Qui-Gon Jinn body. I like the 2003 one better-- it has less articulation, but more personality. The sculpt is arguably better here in 2003, but it can't sit. Overall, I like the 2003 one more. He should set you back $10 or less.