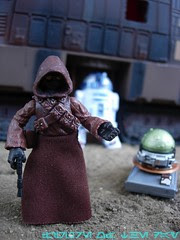 Commentary: For the time being, this is the most recent Jawa available today-- Hasbro cranked out four of the buggers in 2009, with two animated versions and two movie versions. This one is based loosely on the previous two movie version, which is to say, it has super-articulated arms, no light-up eye features, and a nice look. This one is upgraded slightly, with new cloth lower robes and two individually articulated legs unrestricted by a hard plastic cloak. Believe it or not, this is a first for a Jawa since the original in 1978. (The first three in the modern line were single-leg figures.)

As of right now, I would give this figure the crown as the replacement for the original cloth-caped Vintage figure. (The 2007 release feels similar to the vinyl version.) Anyway, this new version has about 10 points of articulation, which is basically as good as any Jawa gets. The darker color matches that original Kenner cloak nicely, with yellow eyes set inside his black face. The smaller blaster resembles the early POTF2 version (1996), and the sculpt is... well, it's as good as any Jawa gets with a few sculpted bits and a few cloth bits. Actually, this is the only Jawa in the modern line with cloth so far, until/unless Hasbro does a vintage one, which I'm somehow doubting they will in the coming year.

Collector's Notes: I really dig this set, when I got it I decided to grab my sandcrawler, run outside, and take some nice photos-- that's inspiration! It can be had as low as $9, but it also seems to go for more now. I'd say that it's a decent value for $9, but the companion droid is much smaller than previous 2-packs. I mean, the LIN droid and Treadwell droids were pretty meaty.

Legs yes, meaningfully articulated.... no. I think the waist was and the cloak would hinder any movement.