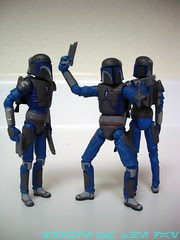 Commentary: There were two different Mandalorian Warrior figures sold in the battle pack, mostly the same save for the accessories. As I've said before, this mold is one of Hasbro's best. What you might not know is that you absolutely need this gift set to fill up your Mandalorian Transport vehicle, because few other figures can fit in those small chairs. The articulation is exceptionally good-- the ball-jointed hips are included in a grand total of 16 points of articulation, with a design that lets them stand at attention, straddle a bike, or fight for whatever it is they're after these days.

The first two Mando figures were very dark, with dark blue suits and almost black armor. The later ones were like these-- bright blue, with lighter gray armor. I don't think either is necessarily perfect, but it would seem the darker ones may be closer to the renders. Even then... I'm not sure either is really more "right." Anyway. The figures have working holsters, although I should note this set includes both large and small pistols which look the same at first glance. The little pistols fit in the holsters. The big ones do not. Fair warning.

I see this as a figure that shows what Hasbro has learned about figure design from its other properties-- you can see some of what worked in Marvel and G.I. Joe brought here, like a higher-on-the-waist joint and the return of those lovely bending wrist joints. The Mando troopers are one of very few molds which, on release, feel like something you probably wouldn't be able to do any better. They're almost perfect, so it might be years before Hasbro sees fit to tweak them. One thing I don't get is why they didn't work harder to make these guys available.

Collector's Notes: Despite being pretty tough to find, the price dropped recently on the secondary market-- it's closer to $30 now, which is good, before it was approaching $80. Since these guys are nearly identical to the individually carded figure you may not feel it necessary to get more, but I like the design and I've got one of each. So get it if you're feeling saucy.

These figures all blow. There's supposed to be a soldier under that armor? Culture of anorexia?
A perfect representation of the pussification of the mandalorians by this cartoon series. School lunch crisis!