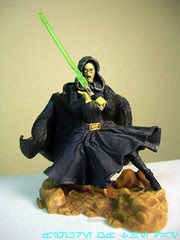 Bio: Barriss Offee is the Padawan learner of Luminara Unduli, and similarly shares her Master's latticed facial tattoos. The youthful Jedi apprentice often prefers wielding a lightsaber to participating in diplomatic negotiations. During the Battle of Geonosis, Barriss must defend herself and her fellow outnumbered Jedi from the Separatists' impending droid armies. Her strong healing abilities make her an invaluable asset when the battle erupts into a full-scale ground assault and the beginning of the Clone Wars. (Taken from the figure's cardback.)

Commentary: As I've mentioned before, the figures of 2002 and 2003 were a little confusing and it's no surprise that fans requested a new version of Barriss Offee almost as soon as she came out. (New versions wouldn't come until 2011, at which time a new cartoon and a new movie version were released a few months apart.) The 2003 release is an astonishing piece, and a terrible toy.

Around 2002 Hasbro got really interested in the statue market, with its oversized "Unleashed" figures and to a lesser extent, the Collection 2 assortment of the 3 3/4-inch action figures. Luminara Unduli was basically a statue with arms, and Barriss follows suit. She needs her display base to stand properly, and while she does include an action feature, she's a terrible toy. She can't sit. Her legs can't move. All you can do is twist her head, position her arms, and basically have her scream and position her lightsaber. As a sub-category of action figures, this style is pretty remarkable-- it's just evidence of competing, incompatible schools of thought of how to do toys. As a display piece, the figure is pretty neat-- but the crazy cloak and screaming face are sort of out of touch with the bulk of this figure line.

The texture, deco, and sculpting are all pretty good and if an extra few cents were spent painting the dead droids on the Geonosis-themed base the right color, it would be a much better release. As a thing you can look at, it's pretty cool. As a toy? This is terrible. So depending on what you do with your toys, this could be the coolest thing ever that it's a crying shame Hasbro didn't keep doing... or a chunk of trash that you should be glad they fixed in 2011. I like it for what it is, but I'm really happy we got a new, better version this year. I will say this: she has a great personality.

Collector's Notes: This was a pretty neat figure in its day, but I don't remember it being particularly popular or well-received. And today it's worth about $5. If you liked the bigger Unleashed toys, I think you might dig this one. I wish Hasbro did do a few more figures in this style, but not minor characters-- I'd love to have a crazy-posed Maul or Vader in this size. Well, I guess we got a Darth Maul like this in 1999, as well as the 2002 "sneak preview" Jango Fett, which did a bang-up job of giving you a fantastic sculpt but a rotten toy.

We ended up using a Dremel on the head of this figure and created a alternate head for the new VOTC Barriss Offee for when she's in battle due to the sedated look of the new head sculpt. We also kept the cloak for an alternate as well.

What about the magnet hand?

On top of everything, she has the wrong light saber, too. Should be blue, not green.