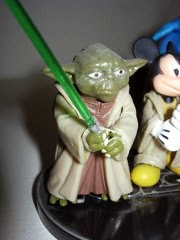 Bio: Mickey Mouse teams up with Jedi Master Yoda, another small but powerful fighter against the dark forces in the galaxy. With help from the knowledgeable and understanding Yoda, Mickey takes up his lightsaber and joins forces with the other Jedi Knights in their battles to fight evil wherever it is found. Yoda and Mickey prove that nothing is impossible and as Yoda might say, "Do or do not - there is no try" as long as the Force is with you. Come join Mickey and Yoda on their many adventures throughout the galaxy! (Taken from the figure's packaging.)

Commentary: This Yoda was one I, at the time, sort of decided not to cover. But it is from the movies and does have a Hasbro logo on the box, so here we are. I don't like this figure. The sculpt is a weird cartoony design which, considering it came from 2005, feels like some lost, alternate, or rejected Clone Wars character model. With a longer face and very little articulation, with a moving neck and arms. And that's it. For those keeping track, that means he's technically inferior to the 1996 version, which had a weird joined single leg-- but at least he could bend at the hips.

The picture pretty much says it all. I'm not proud to have this one but I've got it because it has a Hasbro logo on the box. I'm not entirely convinced it came out of Hasbro, but well... I can't prove that. The lightsaber is a new sculpt, and Mickey looks significantly better than Yoda, and as I don't collect Disney that's upsetting.

Collector's Notes: There are at least three versions of this set, with the bulk of the changes being made to Yoda. The first release had a dark-skinned Yoda with a blue lightsaber. It was followed by a green lightsaber. The final release had Yoda with much lighter skin. And I feel like a tool because I have all three. Versions of the set sell for as little as $5 and as high as $15, I'd say make this a $5 purchase if you get it. In the small canon of Star Tours Hasbro action figures, this is my least favorite item in the collection. And I don't just mean this set-- Yoda specifically is a snooze and a waste of new tooling. This one just makes me angry.