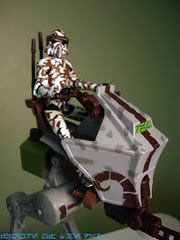 Bio: An ARF trooper in Captain Keeli's unit scouts the enemy's position on an All Terrain Recon Transport (AT-RT) walker. The ARF trooper drives the walker across the rocky landscape of Ryloth to gather information about battle droids heading toward Republic forces. The AT-RT can move quickly and is armed with a blaster cannon for assault missions. (Taken from the figure's packaging.)

Commentary: So far there have been at least 7 figures made based on the ARF Trooper mold, and this Ryloth-specific version is, like the others, supremely cool. They can keep making these all day long, and I hope that they do-- it's a great mold! This is the first animated clone design to incorporate ball-jointed hips, so seeing them reuse it makes me happy. His bend-and-swivel wrists can hold his blaster pistol, or you can park it in the back of the AT-RT walker. The figure appears to be molded in white plastic with lots of dark maroon splotches, and there's also a little bit of grey over it which... I gotta say, I'm not sure it's going to add any extra visual protection. I get the browns and stuff for the dirty world of Geonosis, or the dark greys for the jungles, but I'm not sure I totally grasp this one. Still... it looks cool. No arguments there.

The vehicle should be noted for its exceptional deco-- there's a lot of color on this one, with red horns, multiple shades or red and orange on his feet, plus a green splotch on the front with the word "RAM" written in Aurebesh. Appropriate, given the horns. The vehicle is as good as the others in terms of construction, but as deco goes I think it may be my new favorite. I really like these and hope Hasbro cranks out a new one every year or two-- it's a nice combination.

As an entire unit, I'd say that it's arguably worth it. $17 is a lot of money for a repaint these days, but the clone is cool and I like the vehicle a lot and the clone looks great. What's not to like? If you ever see it on clearance, buy it-- because if you don't, I'll be buying a squad of these if it gets to $5 or less. At $17, one is sufficient but... geez, it's nice. I was actually pretty disappointed when it got delayed with no real confirmation of when it would show, mostly because it's such a great design.

Collector's Notes: The set was delayed, apparently by quite a bit-- the date stamp indicates it was likely made in March of 2011. The item was announced in July of 2011, when Hasbro confirmed an August release date. It hit in December, more or less out of the blue after months of silence. It's the third AT-RT with ARF Trooper based on this mold, and probably the most ornate so far. It shipped with Buzz and his BARC Speeder, each is seemingly 2 per case. Due to it hitting in Wal-Mart's busy season, the set could quite possibly sell out very quickly-- I often point out that a ravenous Wal-Mart clientele can gobble up an entire palette of Mr. Potato Heads in under 24 hours, so given I just found this one last Friday I'll be quite curious to see how quickly it will vanish. (Or if it will vanish.)

So far there have been very few toys from this episode-- I have my doubts that we'll see Keeli, Ima-Gun Di, and Dao as action figures but Hasbro has done some wacky things before. Just in case... be ready and pick up this set.