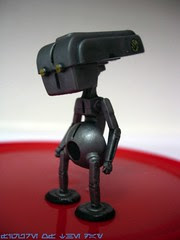 Bio: Cad Bane and Todo 360 sneak inside the Jedi Temple. Bane has a well-deserved reputation as a ruthless bounty hunter. He is hired by Darth Sidious to steal a Jedi holocron. He and his techno-service droid gain access to the building and break into the well-guarded holocron library. (Taken from the figure's packaging.)

Commentary: Those with a sense of history may remember that Todo 360 was originally appearing on some online pre-orders when the very first Cad Bane figure came out a couple of years back-- before we really knew who or what a Todo was. It turns out he's basically a robot butler thing, and in the show was yet another source of comic relief as a robot with a less-than-pleasant personality. The action figure captures the look of the robot almost perfectly, but beware: he has one point of articulation. Despite his design being covered in places to hide a joint, Hasbro put only one in-- and that's at his neck, so don't try to bend the other ones or they might snap.

Sold as an accessory to Cad Bane, the figure is actually quite good-- I remember not 20 years ago, Playmates would include a sidekick figure with its Teenage Mutant Ninja Turtles line and they were rarely, if ever, given any paint. Todo's paint job rivals most vintage figures, with painted eyes, a little grime, a tampo on his head, and black feet. Even if Hasbro revisits him later, there's very little room to improve on the paint job, and that's always nice to see. I wouldn't mind a joint or two as his large head may make him topple over if you aren't careful. You might want to lean him up against something, just to be safe. As bonus accessories which basically count as figures go, he's one of my favorites. He's also voiced by Seth Green on the TV show, so that's gotta be worth something. (Green voices Ion Papanoida as well.)

Collector's Notes: This figure is still showing up, so if you see it, why not grab it? I figure since there have been multiple Cad Bane figures, this one is probably going to be the best one to pick up since it included a bonus figure. Both Todo and Cad Bane were also repackaged in a battle pack in late 2011.