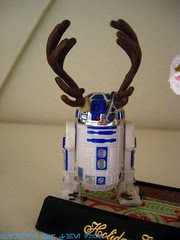 Bio: Hasbro and Lucasfilm Ltd. are delighted to present, for the first time, this Star Wars Holiday Edition commemorative. Inspired by the artwork of renowned artist Ralph McQuarrie, this specially designed set captures the imaginative vision of McQuarrie's art in collectible 3-3/4" action figure scale. Our gift to you, this piece is a distinctive addition to any Star Wars collection. May the Force be with you, and happy holidays. (Taken from the figure's cardback.)

Commentary: Ho, ho, ho. From 2002 through about 2005, Hasbro put out a bunch of Holiday Edition figures based on everything from classic Ralph McQuarrie holiday paintings to what I assume was a fantastic deal on red paint back in 2005. This R2-D2 was half of the very first set in the series, which was joined by C-3PO in a Santa outfit. This R2-D2 is modeled on the 2000 R2-B1 mold, painted up like R2-D2, and modified to include antlers-- given the red light under his eye, I assume the intent was to portray R2-D2 as Rudolph, the Red-Nosed Reindeer.

What I find particularly likable about this guy-- minus the novelty-- is how Hasbro sculpted the droid to look like the costume elements were, in short, sort of half-assed. On the left, it looks sort of like an antler was embedded into a small block, which was attached to his head somehow. I have no idea how, but it is. On the other side, it looks like C-3PO took some duck tape and stuck it to his head, which is a kind of a thing I'll always find funny. The dome sculpt itself is missing a ring near the bottom, but other than that it's painfully obvious that this is R2-D2-- and it's also painful to see just how far his sculpt has come in a decade.

With only three points of articulation and a light-up eyeport, there's not much to this figure-- even by the standards of nine years ago. Retractable third legs were the norm since 1995, so its absence is easily noticed. As a display piece-- particularly in the box-- this is a really great figure. I don't suggest that you open this set unless you really, really want to... it looks better in the box. But if you do open it, it looks even better in an X-Wing or Y-Wing fighter's droid socket.

Collector's Notes: The holiday line was plagued with cancelations-- the entire series was developed as a Fan Club exclusive, but only two of the products were released through the club as it repeatedly changed owners since the early 2000s. In other fun, I'm writing this in November-- I work ahead-- during a surprise internet outage. While this set originally sold for about $14, I remember it shooting up to $20 and $30 on eBay-- and unsurprisingly, it dropped and now it's $10 or so.

This piece was one of the first items I saw that showed me just how the Wal-Mart customer juggernaut could absorb a case of product quickly-- I actually saw a case of these on a pallet, and took it upon myself to liberate a set. I went back in a day, and they were gone-- and I didn't see another one until weeks later, in another city, and that felt like a fluke. This time of year, I've even seen an entire pallet of Mr. Potato Heads-- hundreds of units-- sell through overnight.

Weird, this one pops up in assorted figure lots from those questionable Chinese sellers.