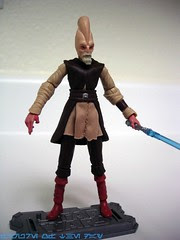 Bio: Ki-Adi-Mundi is part of the massive attack to destroy a Geonosis factory churning out dangerous new battle droids. Damaged by enemy fire, the Jedi's transport crashes short of the designated landing point. As he pushes forward, Ki-Adi-Mundi and his squad enter a cave where they are attacked by Geonosian drones. (Taken from the figure's packaging.)

Commentary: This Ki-Adi-Mundi probably has had the longest shelf life of any version of the character. Since his introduction about a year ago, he's still fairly easy to get-- the only exception might be the original Phantom Menace release due to its series' unprecedented level of distribution. This one is slightly better though, and I would say it's the best in terms of durability and play. Don't get me wrong, the Revenge of the Sith one is good, but this one's lightsaber is less fragile and I'm delighted by the robe design incorporating soft plastic and cloth, which allows him to sit fairly well. Or it would, if the back part of his robes were softer-- as it is, he can't fit in a Jedi Starfighter with the canopy closed, so I'd say he's merely good and not great.

With 12 points of articulation-- no ankles-- this is one fine figure. The joints integrate nicely into the design, the deco is good, and the features closely resemble the animation model. He's got a very distinctive and kind face on the show, and on the whole Hasbro replicated it here with flying colors. It's possible that if his head were painted its color rather than molded in it, it might look even better-- but as it is? It's very good. It would be nice to see his hands a less pink color, but still, it's a reasonably minor complaint when the overall figure displays nicely, has a good lightsaber, and show signs of Hasbro trying new things in its toy engineering. I might not suggest that you overpay for this one, but if you see it you may as well spring the eight bucks.

Collector's Notes: I see this one fairly regularly, which is nice because it's better than "What do you mean you weren't at the store that one weekend? Well, it's gone forever now." As such you should be able to procure one fairly cheaply.