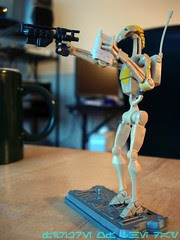 Bio: Battle Droid commanders transmit orders to squads of battle droid. Their advanced programming includes increased independence and enhanced intelligence, which gives them the ability to execute their roles effectively. They have yellow markings to designate them as commanders. (Taken from the figure's packaging.)

Commentary: The token repaints don't happen as often as I would like in The Clone Wars, as few specialized robots like the Battle Droid Commander have been made. We've had firefighter droids, and rocket droids, but not a lot of variation as far as rank goes. So I'm glad he's here. The short version of the review is this: if you have normal Battle Droids, get a Commander. If not... eh, you probably don't need to start here. But I like it.

The mold is a repaint of the 2008 basic Battle Droid, as it should be-- except now he has binoculars. That's what I like-- more. The yellow deco showing his rank really makes him look great, and well, if you like droids you should get one. I got a few-- I'm going to need them driving my tanks. He has somewhat limited articulation, sporting 8 meaningful joints and some nifty ball-jointed arms you can actually pull out of their sockets. Chewbacca would approve. The plastic looks pretty good, and on some figures you can see some silver damage which looks absolutely wonderful. This probably won't be one of your favorite figures, but it's a pretty good toy and I generally like how it turned out. Short of a few more joints-- which may make it more fragile-- I can't think of too much else I would do to it. Except, you know, maybe a voice chip.

Collector's Notes: This one kept shipping for a bit-- which I found interesting as, while I liked the design, it's not one I'd want a bunch of-- you should be able to get one at or under retail fairly easily. But I'm kinda serious about this voice chip thing-- one of my favorite exchanges on the show was between two Battle Droids. I can't find the exact quote, but it was something like "It's the Jedi! Get them!" and the second one says "It won't matter" and then is killed by Anakin. (Made me laugh.)