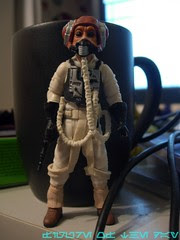 Commentary: For a prototype costume from a movie, the white-suited Ten Numb gets a lot of toy love. He's had at least 3 action figures-- 4 if you are like me and think the red B-Wing Sullustian is also Ten Numb. This white-suited figure is based on a scrap photo from Star Wars Chronicles and other reference books, which became the basis for the white-suited pilot figures and the character in the Rogue Leader comic book series. This body was introduced with this figure, and it has also been used for Keyan Farlander (2008 and 2011), Lieutenant Pollard (2008), Ekelarc Yong (2011), and "Nien" Nunb (2009)... maybe I forgot one off the top of my head. The point is this is a pretty durable body, too tall for a Sullustian but it still looks pretty good.

SInce Hasbro decided to jsut cheap out and use a single taller body, the good news is all descendants from the mold are the same height-- unlike a number of male orange-suited pilots, which were mistakenly given the shorter Luke body. With 14 joints, the figure has a great range of movement and can be posed in just about any action stance. That's the good news. The bad news is that the body type is a huge pain in the neck with all its hoses and cables. He fits into a B-Wing fairly well, I guess, but it's still bulky and may require some fidgeting. The pilots, post-2005, were not designed with piloting in mind. The detail is good, I like the head sculpt, the helmet fits, and it's basically the best Ten Numb in a white suit you can get-- but he's kinda tall, and if that bugs you, I guess stick with the 1999 release.

Collector's Notes: Despite having been released 3 years ago, several Toys R Us stores and online toy shops have unsold units of this. That, my friends, is why Evolutions is gone. You should have no problem getting it for under $20. Just this figure individually sells for under $3 on eBay.