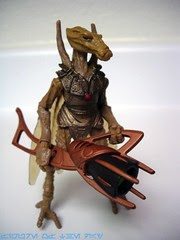 Bio: A dirty filthy Geonosian. (Taken from the figure's packaging.)

Commentary: This Geonosian Warrior continues the proud tradition of fairly decent figures being made based on the Sun Fac mold since 2006. This particular figure has more in common with the 2010 Geonosis Arena 2-pack reissue, as he has knee joints. (Big improvement.) I like this one a lot overall-- the coloring is good, the armor is nice, there's a red jewel on his torso, Hasbro did a nice job making this one stand out. That's actually one problem I have with Geonosians as a whole, there's no real consistent coloring in either the movie or cartoon style-- each one looks fairly unique, so those looking to build an army will need to buy several of a single figure rather than buy a few, here and there, as new versions are made.

His accessory is a sonic blaster similar to others released in the line. With bronze, brown, and green, it stands out nicely. No staff was included this time around, but that's OK-- I can get sticks out in the yard.

With this current articulation structure-- about 14 joints-- he feels sturdier than some of his ancestors. Previous Geonosians lacked key leg joints or were designed without holes in their feet, so getting them to stand up would prove difficult if not impossible. That's not the case here! Since this Geonosian can stand upright, and he's got a stiff set of joints, it seems like he should have no problems standing for the long haul. The only variable, and I haven't had it long enough to confirm this, is that the legs' unique shape may result in bending with heat or gravity over time in ways the joints can't easily help-- so warping could be possible, but the material feels better than other figures. So yeah.... hard to say. My guess is you won't buy this figure on its own merits anyway since it was packaged with a new and improved Delta Squad, but I still like it and would probably support buying it for its own merits.

Collector's Notes: I see this set quite a bit, although it would seem some stores are swimming in them while others... not. It is my assumption that this will be a sought-after set in a few years unless Hasbro releases individually packaged versions of all the Delta Squad members, so go get it now, OK?