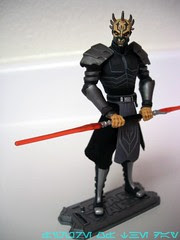 Bio: Savage Opress is magically strengthened by the witches of Dathomir and trained by Count Dooku in lightsaber combat and the ways of the Dark Side. Dooku send Opress on a mission to kidnap the king of Toydaria, but when the Jedi intervene, Opress wields his double-bladed lightsaber with devastating results. (Taken from the figure's packaging.)

Commentary: I got both Savage Opress figures on the same day, which is good because the shirtless one left me wanting more-- and this armored version basically delivered what I needed. The two share a lot of tooling-- the legs and forearms seem to be the same, with different torso, heads, and biceps between them. The reason I like this one so much more is that the face sculpt is slightly better with its closed mouth, and his articulation is improved due to how he was sculpted. The shirtless one has a plastic lower robe, while this one has a cloth piece-- so if you want, you can get him to sit.

The sculpting is pretty clean, without too many excessive details. Hasbro went for a more streamlined appearance with limited textures, aslthough he does have a notable branch design on his... er... loincloth thing. The horns on his head are long and sturdy, and his boots are quite menacing-- someone's going to get kicked in the chest with these. He has few problems standing on his own, if you pose him right it shouldn't be much of a problem.

As to his gear? He has a firing axe missile thing, which looks better than it functions, plus a lightsaber. The saber is inspired by Darth Maul, Asajj Ventress, and Count Dooku's weapons with a few elements from each. I like it-- it would make a nice full-size roleplay toy some day. I assume most people who watch the show are actively searching for this one, and let me tell you it's worth it. The shirtless version is OK but not nearly as cool, which leads me to believe Hasbro knew what they were doing and decided to make the less desirable version more common as, well, you'll probably go ahead and buy the other one anyway if you ever saw it. Due to the villain's Maul-ness, he is one of the show's brighter introductions and will be making some sort of return-- so there's all the more reason to get this one.

Collector's Notes: Two Savage Opress figures hit basically the same week, but the shirtless one shipped in three different assortments while the armored one appeared in but one. So right now, this is the more scarce of the two. I fully expect to see him in droves early next year, because why miss the opportunity?

"Hasbro knew what they were doing..."

Turning ever collector in a potential scalper? Given the after market prices on some recent Star Wars figures, even fans think about resale value when they see a figure they know is scarce.

And if it's a figure kids want? Sorry, kids, your mom and/or dad isn't gonna order a case of figures from an online store, which is the only way you'll get _________.

I hope armored Opress shows up more, but I wouldn't expect it to.

Armored Opress is going to show up more. It's like Anakin. He sells-- Hasbro may be stubborn, but they aren't stupid.

This situation DOES show Hasbro knowing what they're doing. We're seeing a sculpting equivalent of the "prepaint"-- that is, selling the lesser version first, creating more demand for the genuine article (armored) which they'll probably make a whole lot more of and ship for months if not years to come.

I wrote this fully expecting Savage Opress in both styles to ship through next year and possibly beyond-- we know Hasbro is planning on at least Shirtless Savage to be in Wave 1 2012, unless the picture was in error and it's really the armored one.

While I do feel that some of the clones, Even Piell, and a few others may end up being hard to get until they get dumped at TJ Maxx or something, Savage seems to have been elevated to Tier 1 Character. He'll be back, and he might even have more new figures.

As to the kid issue? Well, I wish it were better. This happened in the 1990s with wrestling a lot. This happened in 2007 with the first Transformers Movie Bumblebee (and that's why we get 2-3 of him per case now.) It happened in 1993 with Star Trek: Next Generation Lore. History tells us that there will always be figures that may be out of reach if luck does not favor you that week. I just had a similar situation myself-- the G.I. Joe Shadow Tracker figure was released last January, and I've never seen one. I refuse to buy on eBay unless the price is right.

Anyway, I just found it in November-- it's clearly old stock, but I don't know if it came from Hasbro, a return, or the back room. I remember being a kid and NOW NOW NOW but I also remember with old Star Wars, it took months if not a couple of years to find some figures. I guess the lesson is this: by not releasing figures in big enough numbers, you create cranky old toy collectors who write thousands of pages of free marketing for your products.