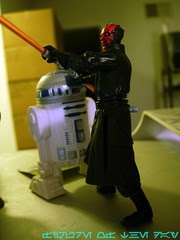 Bio: Darth Maul was a Dathomirian Zabrak Sith Lord during the waning days of the Galactic Republic. Later, Maul was sent to Naboo, where he fought Jinn and his apprentice, Obi-Wan Kenobi. Though (Stolen from Wookieepedia.)

Commentary: The great thing about a movie year-- if you write a toy column-- is that you can see all sorts of crazy stuff, and go back and armchair quarterback it ten years later. With this deluxe Darth Maul, it's really interesting to note that this kind of mechanism was quickly removed from the line, and is making a big return early next year. Actually, from the pictures, I'm not entirely sure if this exact figure is coming back or not yet-- one looks very similar, and it might be this one again. (Or, again, very very similar.)

For $10 this was... acceptable. At the time, the normal Darth Maul was $7, and this one had a large accessory and an action feature to boot. This is not an impressive modern figure, but as Hasbro needed a ton of Darth Maul stuff to sell in 1999 this made sense. It's basically their Jedi Duel version, on a stick, with a button in its butt. You push the button (or activate it via the lightsaber which acts as a battle-stick thing) and he'll wave around his arms. The figure's articulation is similar to the carded counterpart, which means he's of not much use from the waist down-- but his neck, shoulders, and wrists move just fine. This isn't a figure about posing, this is a figure you buy specifically to display or to use to fight your other toys. The mechanism is pretty good, but I can understand that a lot of people would just want a plain, normal, super-articulated Darth Maul and it's 12 years later and it's still not in stores yet.

As a weird side figure, I suggest getting it-- it's meant to be a toy that you can actually play with, and we see very few of those. It's worth about two bucks, and it's absolutely worth that-- I didn't feel it was worth the $10 at first, but now I can say that it was a neat experiment and Hasbro did exactly as many of these battle figures as they should have done at the time. Except it would have been cool to have had a Vader as well, now that I think of it. Maul will not impress you with its sculpt-- after all, Hasbro improves so much, it'd be sad if this was the peak of their talents-- but I do enjoy seeing what they came up with for the kids of 1999.

Collector's Notes: Unless this is, in fact, the basis for the new Movie Heroes figure next year, it's a one-time release. Hasbro put action features to bed until 2002 after this wave came out, with the exception of the spring-loaded 300th Boba Fett in late 2000.

As a single character, Darth Maul may offer one of the richest collecting experiences-- the character has been sold in so many varieties since 1999, you can get a late-era Kenner style figure, deluxe attack figures, figures with experimental dials and magnets, and all sorts of nutty outfits-- short of their being a legit 1970s/1980s-style Kenner version, Maul probably should be your go-to character for getting most (but not all) styles of figural collectibles.