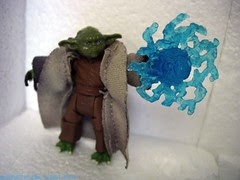 Commentary: This Yoda figure's pre-history is more interesting than the final product-- so let's start there. He was originally going to be part of the late-2010 Return of the Jedi wave on a cardback based on the original 1983 package, but fans (well, a few of them) went nuts, Hasbro agreed, and the figure was updated, repackaged, and delayed until early 2011. My initial reaction was "just put the damn thing out," but well, I'm lazy. I'm kind of surprised Hasbro didn't do it both ways to sell more units, which I'm usually not a big fan of but I make an exception for Vintage cardbacks. Also, Hasbro solicited this product to online stores as "Yoda with Hoverchair," and as far as I know they never displayed a sample to the public which showed a chair. My guess is they took it out for costing reasons early in the product's development.

The figure is pretty good. It reminds me of the 2004 Vintage Yoda-- which I didn't like-- and the 2005 Yodas-- which were a mixed bag. When you get right down to it, Yoda is hard to do well at this scale if you incorporate certain kinds of cloth. The cloth may be too thick to hang right on the figure, so no matter what you do he's going to look a little funky. What's worse, though, is if you take off the cloak some samples have a date stamp carved into the front of his thigh, effectively defacing the figure in a very ugly way. (This has happened on numerous recent Hasbro products as of late.) Those are my two big complaints-- the rest of it is pretty good, but I've reviewed nearly two dozen Yodas and that's a figure which I believe stops being interesting after three or four. When scaled down to a small plastic figure, there's not a lot you can do to change up the design.

Yoda has 14 points of articulation, which I believe breaks the previous record of about 10 or so. The face sculpt is good, and the costume is, more or less, great. At this scale the legs look a little funky with knee joints, but you actually get knee joints, which is rare with figures of this size. For my money, my favorite Yodas are the 2004 OTC version (great sculpt) and the 2003 Bandido Clone Wars release and the 2007 Kybuck version-- I give bonus points for being weird. With his cane, lightsaber, and a reflected Sith energy blast this one aspires to be the best but ultimately left me shrugging. Bring in Yoda in tiny Clone armor or something fun!

Collector's Notes: Yoda is somewhat common and, if you ask me, not necessarily worth the upgrade. If you want a new Yoda, get it-- but if you're on the fence? Save your money. You'll be able to get it below cost on eBay soon if you haven't already done so. He's about $5 on eBay... but I'd say just drop $60-$80 on a real, genuine 1980s vintage Yoda. As soft goods go, despite not being wholly accurate, it looked better as a toy.

The 1980s vintage Yoda with its two variations is a superior figure even by today's standards. Why can't Hasbro match the Kenner figure from over 30 years ago?

This must be a new definition of "superior" I haven't heard before.

Best version of Yoda so far, thanks to the articulation.

Don't get me wrong, I like the new Yoda ROTS vintage with all of its articulation, but the vintage Kenner had a great facial sculpt, soft goods, and accessories that can stand up today. I consider it superior because the new sculpts just don't get the face right.