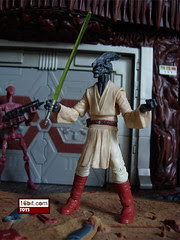 Commentary: The original release of Coleman Trebor was one fans either said they didn't like or couldn't find, which don't exactly go together too well. If you fall into either camp, this 2009 release is arguably a big improvement. Building on the 2008 Qui-Gon Jinn Evolutions body, new hands, boots, and head were affixed to a retooled torso, and a couple of modifications later you end up with a super-articulated version. While not as beefy as his previous release, he still looks sharp and is much more articulated if you're in to such things. He has good articulation, a good sculpt, and deco that certainly doesn't disappoint. If you can get a deal on this one, or also want the companion Jango figure, you should snag it.

Collector's Notes: Depending on where you live this may be available-- as I write this, the assortment in which he ships is still available at many Target stores. Keep your eyes peeled, or watch eBay for someone inevitably dumping it on the cheap.