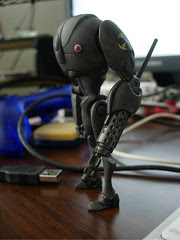 Bio: These tireless, fearless droids are used in heavy infantry assaults, unleashing an unrelenting onslaught of firepower until the object of their attack is destroyed. They have integrated weapons, such as a built-in arm cannon, and are sometimes used as field officers in the droid army. (Taken from the figure's packaging.)

Commentary: Sometimes, repaints are pretty welcome. I'd say the Heavy Assault Super Battle Droid is one of the good ones. The coloring is pretty different than the previous releases, as he is lacking the dirt/damage paint and has a lighter grey painted on what amounts to the top of his body. There's also a swell faction logo on his arm which, I must confess, I don't know what it is as of yet. Maybe it's a spin on the Radioactive symbol. The newly tooled arm has a giant gun hand, and you can load a rocket in there and shoot it at your other toys. This is an honest-to-goodness fun toy, big and beefy and ready to knock down other action figures. He isn't super articulated but he's certainly good enough to buy if you dig his look... and dig knocking over other toys.

Collector's Notes: The figure didn't exactly perform terribly well, and depending on your stores you might find some sitting on the shelves. If they're cheap, I suggest you pick up a bunch of them while you can. It's a great figure and should be good in any toy box, diorama, or trade pile because they're neat.