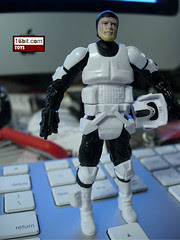 Bio: Some Rebel troopers disguise themselves in the uniforms of captured or fallen Imperial soldiers to infiltrate the enemy's position. (Taken from the figure's box.)

Commentary: The Endor Trooper in Biker Scout Disguise was actually a former Fan's Choice candidate, back when Hasbro told fans that, if made, they couldn't do a removable helmet because of the beard. How far we've come! This figure takes the super-articulated Scout Trooper body and gives him a new head plus the helmet. The paint job is slightly worse than an average Biker Scout, with some details like the soles of the boots being left unpainted. His midsection is also left plain white rather than being decorated in a cream color. Other than that, it's super articulated and awesome. Were this a carded figure, I'd strongly suggest buying it. It doesn't break a ton of new ground, but it's made from enough quality parts and is a decent enough idea that you should totally get the set.

Collector's Notes: The set itself is still findable in some markets. While Hasbro has not identified him as such, it appears this is in fact Nik Sant, a bearded Endor Rebel named for Santa Claus. That's how great imaginations are in Lucasfilm's naming camp. "Dude's got a beard? SANTA CLAUS."

Email ThisBlogThis!Share to TwitterShare to FacebookShare to Pinterest
Labels: Rebellion, Return of the Jedi, Stormtrooper, TLC

It's so funny that you reviewed this figure yesterday, Adam. I won it on eBay and it just arrived in the mail. I love it. The head looks particularly good.