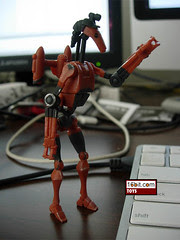 Bio: Some Battle Droids are supplied with jet backpacks, which enable them to navigate for short distances through the vacuum of space to board Republic ships during battle. Since they do not need oxygen, the droids are useful as part of raiding parties to infiltrate and capture ships. (Taken from the figure's packaging.)

Commentary: The Rocket Battle Droid was a pretty grim spin on the goofy Battle Droids. These red robots would fly through space looking for lost escape pods, cracking them open and causing the poor victims inside to be blown out into space. Unlike their cousins, they're pretty good at their job and they can afford to be goofy because they're so good at what they do. If they were worried, it probably would take them down a peg. The figure's body is the same as the basic 2008 Battle Droid, but it has a new head and a new backpack. The miner's helmet-style light on his head is pretty cool, and the rocket pack seems a lot neater than the big backpack with the antenna. The Rocket Battle Droid has 8 points of articulation, which isn't bad, and is generally a good release.

Collector's Notes: The figure was available on a blue card in early 2009 and a red card in late 2009 and 2010. The same figure was also repackaged for the Target Ambush at Ambregado set, in a slightly different shade of red. Either version is acceptable, I don't believe most fans will notice the difference. For the purposes of this column, we're not going to cover the other release.