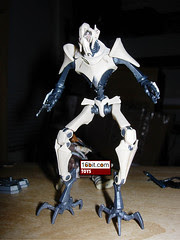 Bio: Within his secret lair, General Grievous stores his spare cybernetic parts to replace any that become damaged. When two Jedi infiltrate his hideout, he relishes the opportunity to duel them for their lightsabers. Injured during battle, Grievous temporarily retreats to be repaired by his medical droid.(Taken from the figure's packaging.)

Commentary: My initial reaction to this figure was a mix of scorn and praise. I'd say that stuck-- this General Grievous was clearly designed with collector tastes in mind, despite Hasbro claiming their new entries were kid-focused. The figure has crazy amounts of articulation and spare parts, besting the finest offerings from Legacy and beyond. So why the scorn? The figure is cast in incredibly soft (rubbery) plastic to avoid easy breakage, which means that if you live in a warm climate he will not stand up for more than a few minutes. He cannot support his own weight, and his display stand accessory is of no value since he has no foot holes. If the figure could stand and was made from a material that's not going to warp easily, I'd say this might be one of Hasbro's best-ever offerings of the bad general. I mean, it's remarkable what they tried to do here, working in so many joints without hurting the look and feel of the character. It's also from "Lair of Grievous," a great episode of The Clone Wars. Sadly, the limbs pop out way too easily and it feels incredibly fragile, which is bad for a figure theoretically aimed at kids.

If you don't open your figures, this is a gorgeous specimen. The damaged head with the slashed-up face plate is stunning, and it's easy to admire how Hasbro worked in all those leg joints to give the figure a range of motion unexpected for a character of his design. But he can't stand, which, to me, is a huge problem. Also, the armor on his shoulders pops off if you so much as look at it, so be prepared to lose a lot of small parts with this one. Great idea, decent execution, but ultimately it seems to collapse from under its own weight in terms of both ambition and actual weight. It's a figure that's so cool in what it tries to do, and unlike the 2008 General Grievous from The Legacy Collection I have to give Hasbro credit for working in so much here that it's clear they were really, really trying to make a wonderful figure for fans of all ages. It's just so dang spindly that it may be difficult to keep this figure in good shape after opening it.

Collector's Notes: Depending on how your stores were, this figure is either new this week, or you saw it in June. Either way it's new and will likely be in circulation for a while.

It is also worth mentioning (though few people do) that this is actually a glaringly wrong version of the "Lair of Grievous" general. In the episode, he loses his legs, not his arms. If you are one going for accuracy, and not just wanting another grievous hanging around, I say don't bother with this one - when I found out it was his arms that swapped instead of his legs (i.e. after I opened it), I was definitely upset and exceedingly glad I got it during the bogo sale at TRU.

Removable legs are indeed a listed action feature. You can hack 'em off.