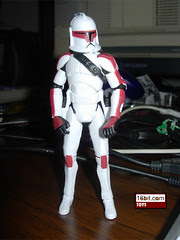 Commentary: Hasbro is great about realizing when they can milk a mold, and Clone Trooper Jek is a great example of a repaint you'd want. Sporting essentially a modified Rex body, the figure has a bald head and hip holsters for his pistols, giving him a unique appearance while using mostly existing parts with some red paint slapped on. It's pretty accurate to the TV show, and is articulated at 14 points-- including the specially enhanced wrist joints. There's not much else to say other than it's another repaint of an insanely good mold, plus he's from the fairly popular episode Ambush. At the right price, I'd say buy him.

Collector's Notes: A carded Jek figure was also sold in early 2010. For all intents and purposes, it's basically the same figure with some minor deco changes-- specifically some painted details on the bandolier were added. For the purposes of this column, we're considering it a variation and not a new figure. The 2-pack later showed up (sans Wal-Mart sticker) at many Toys "R" Us stores, which I believe means the item was either an intentionally timed exclusive or a sort of a planned closeout. You may be able to find these still.