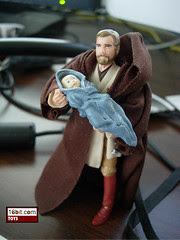 Bio: Darkness descends over the galaxy as Palpatine's power increases and Darth Vader joins him as his Sith apprentice. The former Anakin Skywalker is unaware that his beloved Padmé gave birth to twins after their final meeting. And if those children are to remain alive, he must never know they exist. So Obi-Wan secretly brings Leia to Bail Organa and his wife, who will raise her as their daughter. Then he travels to Tatooine, where Owen and Beru Lars become the guardians of their nephew, Luke Skywalker. (Taken from the figure's cardback.)

Commentary: Are you sick of this mold? Too bad! Hasbro has another Obi-Wan Kenobi based on the 2005 Revenge of the Sith pilot version which, undoubtedly, was the last big breakthrough with this particular outfit. Sure, we've since seen a new head sculpt and new hip joints, but they're all basically the same as this one. This takes that same 2005 body, gives it a cloth robe, and a baby repainted from a late 2005 exclusive "Separation of the Twins" exclusive. Obi-Wan still has 14 points of articulation, but since he'll likely only be carrying a baby, this was a little much. The sculpt is good, the lightsaber hangs just fine, and the figure just happens to be sculpted to hold the baby. Or rather, the baby was sculpted to fit in Obi-Wan's arms. For fans of wanting to get everything, this figure qualifies as different enough to make you mad-- the baby blanket is a new color, and the cloth cape is different than the version from 2005. I personally think that as the baby figure sets go, the comic pack is superior to the individual ones.

Collector's Notes: None are on eBay as of the time I wrote this feature, but other sellers are charging seemingly high prices for this set. I wouldn't overpay for it, but if you can get it for a fair price it's absolutely worth owning for the babies. Assuming you want baby figures of Luke and Leia, of course.