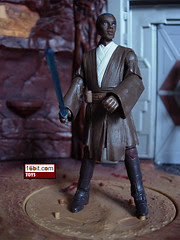 Commentary: It's both surprising and completely understandable that Roth-Del Masona is rotting on some Target store shelves. This exclusive action figure, which was packaged with a Super Battle Droid, was one of only two all-new characters introduced over the six 2-packs. The figure takes a Mace Windu and throws on a new head, plus a bunch of paint. The outfit is pretty close to the film, but it adds a lot of extra cream coloring to the middle of his chest, when it should be closer to the amount on the original Mace Windu figure on which he was based. He has 14 points of articulation, and is basically not a character anyone who only watches the movies would know. He was killed by General Grievous off-screen, so really, this is a pretty low-level Jedi to consider making. The assortment was pretty dull when you consider the only two new figures were Jedi that people flat-out don't know. So yeah, you can probably still find him, but the main reason to get him is because you have to collect them all.

Collector's Notes: This one can be had for SRP, easily, if not cheaper. Since he came with a barely-a-repaint of a figure which has been widely available, it's no surprise he wasn't a huge hit, but it's unfortunate that the new Jedi figures in this assortment were generally the weakest performers.