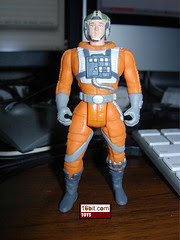 Bio: Wedge Antilles was a famed Corellian pilot and general, known as a hero of the Rebel Alliance and New Republic. A standout starfighter pilot, he was one of the few to survive the Battle of Yavin, after which he founded Rogue Squadron with his friend Luke Skywalker. (Stolen from Wookieepedia.)

Commentary: I try not to swear too much, but when I pulled up the photo to write about this Wedge Antilles my first thought was literally "Man, fuck that figure." The 1997 figure is a baffling release (which we'll get in on below), but for the sake of the column, we'll focus on the actual figure here. Since this was the only mold that existed, Hasbro's Rhode Island division (back when the Cincinnati division did most of the line's work) decided they had a great idea-- to take a Millennium Falcon carry case, and to take a 1995 X-Wing Luke Skywalker and put a new head on it. And presto, Wedge! Two variants of the figure exist-- both have very different paint jobs, the second of which is slightly more authentic but still off. The mold is, obviously, the Hoth Snowspeeder pilot suit.

The first release has Luke's markings on his helmet, plus white stripes on his sleeves. The second release (pictured) is more authentic to the helmet in the movie, and the white stripes were dropped. It's still pretty iffy, and even in 1997 there was a lot of moaning about this one. With only six points of articulation, there's not much to speak of here. He's too muscular and since he wasn't released at a sensible price point (setting a tradition for Wedge figures), he was met with more scorn than delight.

Collector's Notes: The last time I checked, the figure wasn't going for much. The product itself makes no sense-- why is Wedge the bonus figure with Han Solo's ship? Why was he painted badly? Why did this figure start a precedent of Wedge being released only as an exclusive but never as an individual mass-market release? Despite the higher price tag in 1997, the figure's price has stayed low and there's really no good reason to shell out big bucks for this one. It just isn't that good.

I remember seeing this dude at a ToysRus separate from a ripped open MF Carry Case.

I had a crisis of conscience...steal the guy on the little yellow card or not?

I didn't. Ended up buying one on clearance a few months later. I still regret it.

Still regret not stealing? or still regret buying this one at all? ;)
I kinda regret buying any of the Muscly-armed Star Wars figures of the 90's, but I guess they have their nostalgic place? OR not.

Regarding Wedge being a higher price tagged figure, there's some warped mentality that some characters should be harder to acquire. It's that way with GI JOE, too. They had molds for hard to get vehicle drivers, then only reissued them as convention exclusives.