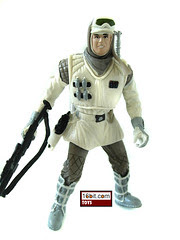 Commentary: The Rebel Trooper seems to be one Hasbro doesn't seem too high on making great, at least until the 2009 release. This figure was released in 2007, and was based on a version from 2004 which was awful back then. The figure has 6 points of articulation, an incredibly strange pose, an iffy sculpt, and was short. Any one of those things would have made it unpleasant, but all of them combined gives you a figure that really should be given away as an afterthought in a big boxed set. And hey-- he was! As box-filler, he's pretty cool. Just throw him off to the side to get stomped by an AT-ST or whatever, and he's pretty decent. It's just that when he's next to your other figures, his inferiority makes itself apparent. As a repaint, he's pretty similar to the original. His pants and grey elements are a little darker than the first release, but the face is the same, the goggles are still green (if a different green), and the paint masks don't seem all that different. A lot of people didn't realize he was different at first, so this is one I wouldn't suggest jumping on unless you were going to buy the complete gift set anyway.

Collector's Notes: The full set does still command a slight premium price, and at $50 or less is a bargain. This is only the second use of this mold, so I wouldn't suggest going nuts over it as better Hoth Rebel Trooper figures have been made and will be made in the future. (But if you're buying the box anyway, he's certainly a nice release.)

Email ThisBlogThis!Share to TwitterShare to FacebookShare to Pinterest
Labels: Exclusive, Rebellion, TAC, The Empire Strikes Back

It's a terrible figure loved only by terrible people for terrible reasons.