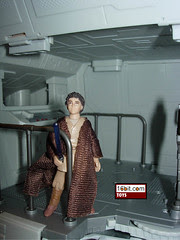 Commentary: This Padawan figure seems to be modeled after a real person, but we don't know who it is. (If anybody.) Utilizing the 2000 Power of the Jedi Anakin Skywalker body with a new head (rather than the 1999 Naboo Anakin Skywalker body, which would have been a better choice) this figure managed to fudge us a new Jedi figure with a decidedly non-Jedi mold. To be honest, the figure looks more like Kitster than it does a regular Jedi. This may make him a good stand-in for your Mos Espa displays since the odds of Hasbro making an actual official Kitster are inversely proportional to the temperature in Hell at a given time. The figure's articulation is unremarkable, while he does have knee joints there's little else to speak of here. The important thing for you to remember is that there are very few Padawan figures, so this may be worth getting just to add to your very small squad of very small Jedi. He isn't remarkable, but the character is unique to this figure.

Collector's Notes: Sold only at Disney parks, I have been told that this set has shown up on sale. I have not confirmed this, but you may be able to get it at a reduced price.