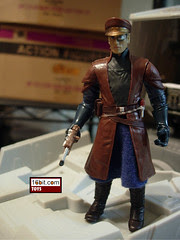 Bio: Gregor Typho is Senator Padm:eacute; Amidala's head of security and an able starfighter pilot. He is diligent and capable in the performance of his duties, yet he is up against devious enemies who will stop at nothing to eliminate Padme. (Taken from the figure's packaging.)

Commentary: If you were to make a list of like twelve characters fans never asked to have redone, Captain Typho would likely appear on the list. In 2002 we got a version of him in a pilot-esque outfit, and this version adds his hat and coat for a more formal Naboo security officer look. Hasbro went all out making this an excellent figure, which seems goofy given that it just isn't a character fans care about much one way or another. He is indeed super articulated, plus he has some cloth around his waist so you can actually move his legs a little. His hat is removable. His head sculpt is excellent. His blaster is even painted up, for heaven's sake. Why on Earth would Hasbro put so much time and effort into a non-character with such features as a removable communicator? Or am I answering my own question? The amount of work put into this figure is incredible, and the craftsmanship is above and beyond what you expect from a Hasbro Star Wars action figure. Still, it's Captain Typho, and that one strike is likely to make most fans skip it. Which is a shame, because as I said, it's really a well-done figure.

Collector's Notes: Some regions of the country received ample amounts of this wave-- the vocal regions did not. As such, he's a little hard to get and his inclusion of an HK-47 part makes him slightly more desirable than he should be.

Email ThisBlogThis!Share to TwitterShare to FacebookShare to Pinterest
Labels: Attack of the Clones, Naboo Troopers, TLC

Quit taking digs at Captain Typho. He's head of security for Padme. Do you know how much play he gets at our house? If Padme was there I'm sure Typho wasn't very far behind. He was her bodyguard, dude. Everybody knows who really fathered those Skywalker twins. You could get even more out of your purchase than just the Captain Typho figure. Remember Adam said how well the figure was made. For the body and hat, minus the head sculpt, add in your own head. He's greatly desired by the customizers for his clothing alone. A much desired figure for more than just Build A Droid part.

A really great figure, although I agree with you, Adam, this was about as necessary an upgrade as, oh, say, Dengar. A nice job nonetheless. Had to order this whole wave online, never saw any in the wild.

It's just so comical how hard-core collectors can whine and complain when Hasbro "fails" to make the "perfect" ROTJ Luke Skywalker – i.e., a straightforward figure clad only in black – but when the toymaker goes all-out and does a bang-up job creating a complex, "Technicolor-like" revision of a minor character like Captain Typho, its efforts are summarily dismissed because "this isn't a figure anyone wanted remade."

Um, if I'm not mistaken, many of those same hard-core collectors have been clamoring for an updated, definitive Captain Panaka. I'd say the new Typho was the testing ground for that. Poo-poo it at your own risk.

I say, "Well done, Hasbro. You did a great job on Typho. Thanks."

He wasn't remade. This outfit was never made at all, was it?

As far as a character goes, he's useless. What good is a body guard that's not around? Padme runs off alone or with some psychotic Jedi who's in love with her.

He should've gone with her to Mustaphar and been killed by Anakin.