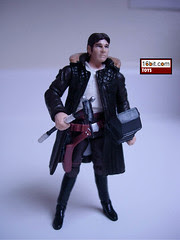 Bio: Solo was a Human from Corellia who achieved galactic fame as a member of the Rebel Alliance and later the New Republic. Solo became caught up with the Rebel Alliance, courtesy of Obi-Wan Kenobi, Luke Skywalker and Princess Leia Organa, whom he helped rescue from the Death Star. Solo helped Skywalker destroy the Death Star when it attacked the Rebel base at Yavin 4, where they had taken Organa. (Stolen from Wookieepedia.)

Commentary: While strongly hinted at for nearly a year, this new Han Solo is a version of the character you probably never realized you saw in the movie. He was in there, but his appearance was so brief that any sane person wouldn't think it would warrant a figure. Considering that just under 2 years ago, we got a deleted scene Sandstorm Han Solo, it's a safe bet that literally nothing is off the table as far as obscure character outfits go. The figure itself is a mixed bag-- some bits are great, some, well, not so great. The new elements-- the head, arms, and coat-- are pretty wonderful. The body is the same we've seen on the 2006 Endor Han as well as the Sandstorm Han and a few others, which means he has those spindly legs and the increasingly worse holster that seems to be falling right off the figure. As a diorama figure, this one is pretty good-- he looks OK and can "fix things," which is basically what you would want. He's not much of a sitter, and I think if he experienced heavy play you would lose his holster. That thing just feels flimsy. It's a non-essential outfit and a pretty obscure debut for Han Solo in this new vintage line (particularly when we haven't had a decent update of the Bespin Han Solo since almost ever), but hey, it is what it is. Since it's technically a new outfit, I'd have to say go for it. In short, it's a Bespin Han but wearing the Hoth Han jacket hanging open. Unless you're short on funds, odds are he's on your wish list so grab him as you so deem fit.

Collector's Notes: Depending on how your stores were, this figure is either new this week, or you saw it in June. Either way it's new! Get it if you want it, I assume that you probably will.

I'm still not convinced I need this figure, because it's essentially the same as the VTSC Han Solo (Hoth Outfit), only with the jacket open and the hood down.

Something was bothering me about this figure and when I got it home and opened him up I realized what it was- his hair is slightly off.
Han's hair should mostly to partially cover his ears. This Han's ears are totally exposed and it makes him look a little dorky, like he's got longer hair in the back but likes to keep the sides nice and trimmed.