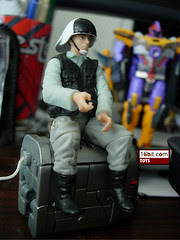 Commentary: In 2001, Hasbro told us we would get three head variants of the Rebel Trooper. Version 1 hit in 2001, versions 2 and 3 hit in early 2003. Better late than never, right? This new version has a new head, but the faces are pretty similar, so this would be "dark hair Saga variant" in my book. The other is a reddish, lighter brown. Designed with a molded-on helmet, the figure has articulation at the shoulders, wrists, hips, neck, knees, ankles, but not waist. Hasbro aped the style of the then-popular 21st Century Toys modern warefare action figures, giving this figure a pretty good ability to crouch without the use of the slightly more expensive ball joints we're used to today. While good at the time, a lot of modern fans outright hate these figures and complain incessantly that they need to be updated. Given that this body had a total of 5 different heads and a complete comic-style repaint, I'm pretty much done with wanting to ever see another version of this trooper, but I see their point. For army-builders or completeists only if you already have a Rebel Trooper, otherwise, I suggest you get at least one.

Collector's Notes: The figure was late, temporarily popular, and hard to identify. A lot of fans don't know there are two different heads on the Saga cardback because they share an essentially identical package. (I don't count date stamps. [And if you don't know what those are, that's good.]) Most of these are pretty cheap, but be sure to ask a lot of questions from the seller if you're looking for a specific version. This specific one has dark brown (almost black) hair, while the other, as stated above, is more red.

Seriously, it's designed for two poses, standing shooting and kneeling shooting. The 21st Century style of knee articulation always sucked and those who liked it suck, because action figures have joints and to be functional, sometimes they show. If you don't like that, collect statues or models. Leave a fun hobby alone.