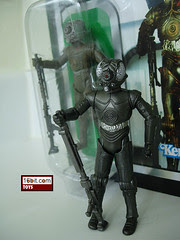 Bio: 4-LOM was an ambitious protocol droid who overwrote his own programming to embark on a life of crime. A LOM-series droid, 4-LOM's first assignment was aboard a luxury liner named the Kuari Princess, where he served as a translator between the vessel's wealthy passengers and its computer. He found this work mundane and undemanding, and after the Kuari Princess's computer altered his programming, 4-LOM began to steal from his passengers. Eventually, he left the Kuari Princess for good, becoming an expert thief, information broker, and, after Jabba Desilijic Tiure altered his programming further, a highly successful bounty hunter. (Stolen from Wookieepedia.)

Image: Adam Pawlus' bathroom. The exclusive "Kenner deco" or "error" figure stands in front of the standard retail release version with the correct name on the package.

Commentary: Did you ever wish you had the 2007 Zuckuss mold in 1982 Kenner 4-LOM colors? Well, now you can buy it! At first I was hard-pressed to think why it would be exciting, but the comparison shows a few niceties-- the exclusive version has a red light on his head, a much cleaner body, some silver, and generally looks very "classic." It seems like an old goofy space toy, which means I automatically love the super-articulated, 14-joint Bounty Hunter robot. He can stand, sit, carry his weapon, and basically be awesome. What more could you possibly hope for? I prefer this version to the 2007 original, just because it looks so gosh darn clean and space-like. It's really pretty wonderful, and his companion 4-LOM is even better. I wish Hasbro just made these standard retail releases because they are so nice, but well, for now, you can probably get them at the convention or online shortly after the show.

Packaging Notes: 4-LOM (modern name robot) also appears in the basic Vintage assortments shipping now, and it is very similar to the convention exclusive Zuckuss (classic name robot). Some key differences are as follows: the Exclusive version has no UPC, the bubble is not extended so that it may stand freely, it has foil, and the back says "Original Zuckuss Card" instead of "Original 4-LOM Card." The figure's pose inside the packaging is also significantly different. The carded figure came inside a box which velcros shut, which itself had a slipcase. The packaging for the individual Vintage figure got a little warped on my sample, so pay attention to that if you want pristine packaging inside your packaging.

Collector's Notes: The figure was sold at Germany's Jedi-Con long before its US release, but we don't count that. USA! USA! The item was sold at Celebration V and is like there right now if you'd like to wait in a line in Florida... and these are neat enough to warrant it.

also at StarWarsShop.com, which is where I ordered mine from this morning... unfortunately no Celebration V for me

I, too, ordered mine from starwarsshop.com last night. Very excited am I!

I would definitely buy more Kenner style repaints. I think it could be the next "Concept Art" figure craze; I mean, why not? Hasbro loves repaints, we love nostalgia, its just the next logical step in a universe that has been badly mined.