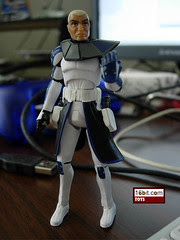 Commentary: There are no shortage of Captain Rex figures, particularly if you're in to variations. This specific one was made to tie in to the first season episode "Rookies." You can tell because his hands are covered in a gooey blue eel blood, which was used to mark a handprint on Echo's armor. the figure itself uses the same construction as Rex, which used basically the same construction as a standard Clone Trooper from the animated line. He has the enhanced wrist joints and the normal compliment of articulation, 14 points. His armor is basically clean, except for the eel blood splattered on his hand (which can be tough to see) and on his forearm (which you can't miss). There is also some "damage" in his blue stripes, which may make this a compelling figure for you. If you have a Rex, the only reason to get this one is the eel blood. And the figure Fives, which is packed with him.

Collector's Notes: There are multiple barely-different repaints of this Rex figure, but this one is one of the more distinctive ones. The original figure came in clean and dirty, and at least one of the versions was effectively "shiny"-- which is to say, perfectly clean stripes and no damage markings of any kind.

I bought this 2-pack mostly because it featured Rex with his helmet "on," as opposed to his retail predecessors. Since I don't open my figs, I'm thrilled that I can take both carded versions and play "peek-a-boo" with Rex's face.