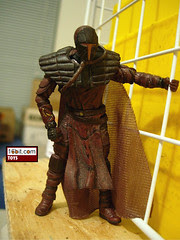 Commentary: This was a truly delightful surprise of a figure! In the now-ancient Tales of the Jedi comic series, we were treated to a meeting with one of the earliest incarnations of Mandalore and we now have a figure with him! This one fought Ulic-Qel Droma (also now a figure) and met an untimely end as the Sith War progressed. The super-articulated character makes a good translation to three dimensions, and arguably has more detail than his coconut-masket comic book ancestor. It really does look like a supremely primitive Boba Fett, which is good and bad when you consider this is still a spacefaring culture. Either way, the figure matches the concept, which is what you want.

There's a hole in his armor which lets you plug in spare weapons for storage, and the design seems like it could have even been a Jack Kirby-era villain, if not necessarily drawn by the man himself. (Beef him up a little, he could fight in New Gods maybe. Or maybe not, I'm no expert... or am I? [I'm not.]) Weapons can hang over his shoulder, and his cape is one of the best Hasbro has ever offered on a figure of this size. I'd even suggest getting spares of Mandalore just to give the cape to other figures like the 2008 Space Armor Saesee Tiin, that's how good it is. The deco is pretty light, but functional-- you will not be disappointed with this release.