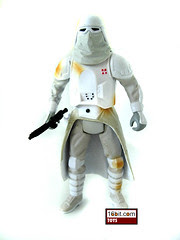 Commentary: If there's one Imperial trooper that Hasbro hasn't been shy about redoing, it's the Snowtrooper. This version is a repaint of the 2006 figure, which itself was a mix of the 1997 legs and the 2003 figure from the waist on up. He has six points of articulation, which may not sound like much but that's two more than the 1980s original. What makes this figure distinctive is his "dirt" damage, the reddish, almost orange smudges seem like a sort of a rust got dropped on top of this one. The rank badge is painted differently, the chest lights are decorated in a unique way, and the body suit is a little different. So yeah, this is a distinctive Snowtrooper that would stand out as being a little different in a diorama, assuming you wanted such a thing. (You do, if you ask me.)

Collector's Notes: The set went from hot to undesirable to hot again pretty quickly, and now it tends to command a premium. This is good, because the set itself is so packed with neat stuff that the initial $50 asking price was actually sort of low. After all, you got an AT-ST, 8 figures, and a Hoth Turret. Compare this to 2009, when $44 got you an AT-ST and one figure. Pretty sad, really, especially given this was just two years.

Ah but the new ATST is bigger and better than the older one.