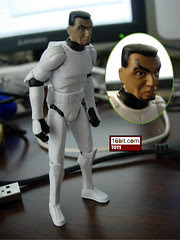 Commentary: Hasbro has released fewer plain white Clones than I'd have expected, and Fives is one of the first ones to have a removable helmet. The body is the same clone body you're all used to, but the head is pretty interesting in that he actually has some distinctive facial markings. For starters, he has a little beard painted on, which is unusual for most clones so far. Second, he has a "5" on his head, hence the name. If you want distinctive clone characters, this is one to buy because, frankly, this is the only plain white clone with a unique face so far. Articulation is 14 points, the fancy wrists are here, and there's really no reason to not buy this one. Although if he comes out carded some day, odds are you don't need (but probably want) the eel blood-covered Rex that Fives comes with.

Collector's Notes: The figure sold well, but seemingly showed up at other places after Wal-Mart was done with it. So it's hard to tell if it was really a hit or not, but either way, it's worth your while to track down.

Honest to goodness, I *never* noticed the "5" tattoo. Who knows if I ever would have, either? I gotta go check this out. My inattention to this detail is very disturbing. ;)