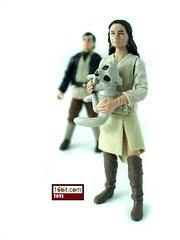 Commentary: Few characters in Star Wars are famous for being removed from the film, but Camie makes the cut. Played by Koo Stark, she's big on the trivia circuit for being known as an adult film star. Wikipedia seems to put it as she wasn't so much an "adult actress" but an actress who did some nudity in a movie early on, but not being an expert in all things 1970s I don't know. Anyway, both Camie and Fixer seem pretty accurate to their movie outfits, in Camie's case she has really long boots, a really short skirt, and a shirt. Her upper legs are bare, and I actually can't tell if her crotch region is painted or the same color as her legs. Yeah yeah, I'm a perv for looking, like you wouldn't after word got out of a similar Slave Leia test shot from 1997. (I saw it, it's real.)

This figure is a completely new sculpt and is, on the whole, very nicely articulated. She has no ankle joints, but that's reasonable given it would muss up the look of the boots. (Ankle joints are not always good-- see the Comic Pack Leia from Shadows of the Empire for a good example.) The head sculpt is nice, the outfit is about right, and the range of motion is acceptable. Given that she's a convention exclusive of a fan so obscure I would wager a significant number of the convention-goers won't know she was cut from the original film, I'm not particularly concerned that she can't sit due to how her clothes were sculpted. Due to the nature of the figure-- being a comic pack and a deleted scene figure-- this is one of the most exciting releases for us older fans who are in to such things. If I were you, I'd go out of my way to get this set. It's just so cool that Hasbro actually made it.

Collector's Notes: The set was originally slated as a comic pack in the main line, but that was not meant to be. The final release was on the blue and black "Dark Side Approacheth" cardback style which itself was packaged in an attractive window box. It's pretty wasteful, but attractive. There are foil elements on the outer package, a velcro latch, and enough graphical wizardry to make you feel like you bought a premium product. $14.99 is pretty cheap for what this is, especially given that's regular retail for most comic packs these days. Get it.