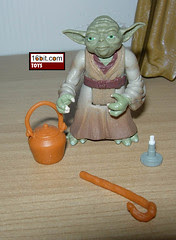 Bio: Like the swamp planet Dagobah where he lived out his last years, the Jedi Master Yoda was shrouded in mystery. A diminutive, green-skinned creature, Yoda faithfully served the Galctic Republic as one of the 12 members of the Jedi Council. When the Emperor seized control of the galaxy, he ordered the elimination of all Jedi. In his darkest hour, Yoda, the last known Jedi Master, went into a life of hiding on Dagobah. When Luke Skywalker searched out Yoda for Jedi training on the advice of Obi-Wan Kenobi, the Jedi Master had reservations, but he chose to instruct young Skywalker in the ways of the Force. (Taken from the figure's cardback.)

Commentary: In 1996, Kenner made the small Jedi master from Dagobah for the first time in years-- and in 1998, a modified version of that sculpt gave us this "new" version of Yoda in what was largely considered a disappointment-- you see, in those days, resculpts of existing figures were fairly uncommon. This figure sports 4 points of articulation and has a decent overall sculpt, although the face isn't quite as good as it could've been, and the only significant and obvious change to the figure itself was the addition of wispy, rooted hair. (There are minor sculpt changes but you probably won't notice those.) The figure itself can sit and move his arms, making him a good toy-- better than some modern Yoda figures who can stand and not do much else. Since he has his pot and the lamp, this could be the only "wacky" Yoda ever-- you know, when he's acting crazy for Luke-- but the face doesn't reflect this. After all, this figure was one of the early experiments in doing scene-specific figures. If you have any non-spirit Yoda figure from 1996-1999, they're all pretty much the same with very minor differences, although with his hair and added accessories, this one does stand out a little more. It's worth getting if you're a fiend for accessories and variations on figures, but if all you want is a Yoda, you might want to keep looking for something else.

Collector's Notes: This was the first-ever Yoda toy to feature the Hasbro logo on the package. The figure has a bright orange can, possibly a nod to the variation in the vintage line in which Yoda had bright orange snake and cane accessories. The figure's flashback photo accessory changes from Yoda (ESB) to Yoda (EP1) when you pull a small tab. There's a variation on the pull tab, but discussing it only makes it stronger-- and we're not here to do that. It's also worth noting that, upon release, fans often referred to this figure as "crack pipe Yoda" because they were clever like that.

Email ThisBlogThis!Share to TwitterShare to FacebookShare to Pinterest
Labels: POTF2, The Empire Strikes Back, Yoda